The peasants’ agitation against the agriculture bill of the Friends Center is in great swing. On this, along with the common people, celebs are also giving their opinion and some are supporting it and some are not supporting it. Recently, due to the peasant movement, Kangna and Diljit were also fiercely debated. While some people supported Kangana, on the other hand, they came in support of Diljit’s baseless statements. However, Kangna is being targeted due to the tweet. He has also deleted that tweet, but now veteran actor Dharmendra has also come into the limelight for one of his tweets which he did for farmers but later deleted it. Raising voice in support of the farmers, Dharmendra wrote, ‘Pray to the government… find a solution to the problems of the farmer brothers soon. Corona cases are increasing in Delhi… It is sad. The tweet was deleted by the actor but by then the tweet had become quite viral and some people had taken a screenshot of it. At the same time, a user tried to target Dharmendra with this tweet. One user shared a screenshot of Dharmendra’s tweet and tagged them, writing, ‘Punjabi icon Dharmendra Deol tweeted this tweet 13 hours ago. But then deleted. There must have been some compulsions, there is no infidelity like this. At the same time, Dharmendra’s reaction has also surfaced on this tweet. 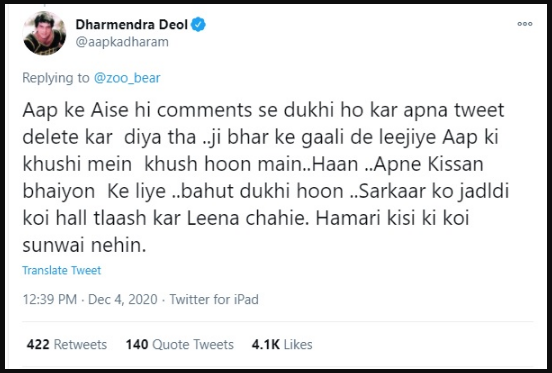 The actor responded to this tweet and wrote, ‘I was saddened by similar comments of yours and deleted my tweet .. Please abuse me happily, I am … yes … for my farmer brothers … I am very sad… the government should find a solution soon, we do not have any hearing.